ADRA is committed to empowering girls and women through our work

ADRA works to help women through providing education and upskilling training. Throughout our projects, we aim to ensure that there is a balance of women and men present at our trainings and both are receiving opportunities.

Check out the stories below about inspirational women that have been impacted through ADRA.

We’re also empowering women who missed out on an opportunity for education.

Ravi (22) has spent most of her working life in a garment factory. She lives at home with her parents and two brothers. While Ravi, her brothers and father were out working long hours, her mother was looking after the family farm and taking care of any household chores, including cleaning, getting water and providing food for the family.

Ravi was involved in an ADRA project where she participated in a 5 month training course to become a seamstress. At the end of her training she received her very own sewing machine. She also participated in business and budgeting training designed to help her set up her own clothes-making business.

Ravi was able to leave her job in the garment factory and run her own business making clothes to sell at the market, as well as doing alterations and making school uniforms. Ravi now has the independence of her own business, she is able to work less hours, earn more income and expand her business through teaching others.

What Ravi is most excited about is that she is now able to help her mother with all the household chores. She has shared, “Life is better because [previously] I had to farm with my mother and go to work at the factory. Now I can live at home with my mother and help her. And I am happy.”

*Name and image have been changed to protect identity. 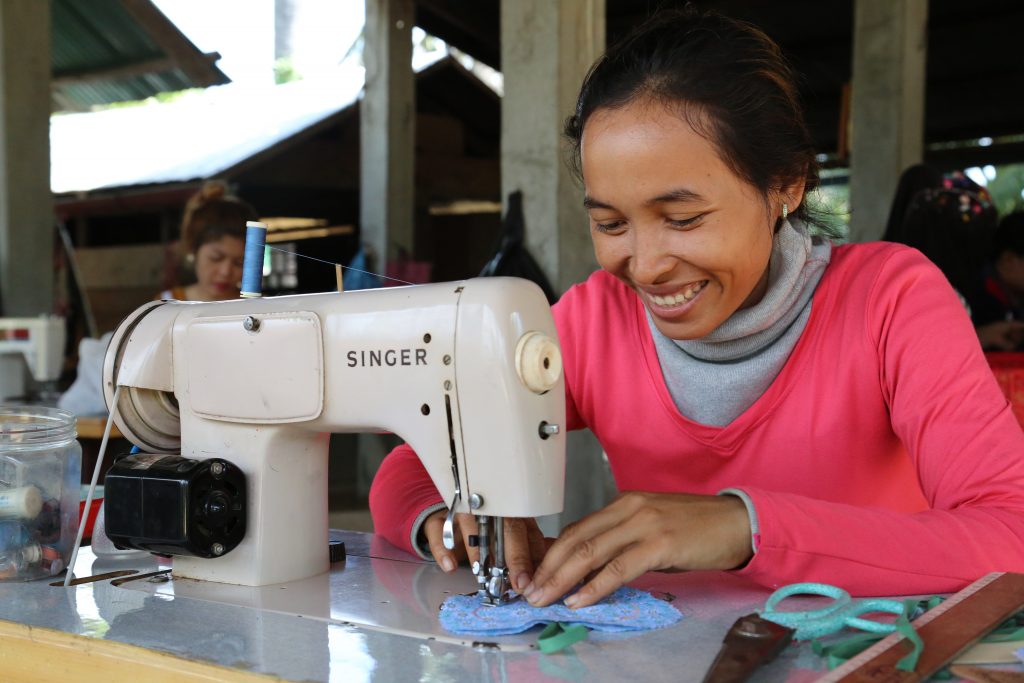 Angela holds her one-year-old son in her arms, he is slowly falling asleep in the Timor-Leste heat. As a single mother, Angela is the sole provider and carer for her son and would do absolutely anything to take care of him.

Both of Angela’s parents have passed away, she and her baby now live with her brother and her two sisters.

Angela grew up in poverty and was unable to finish primary school. Her lack of education has made it difficult to find a job. Despite applying for many different jobs, she has not been successful.

To provide for her son, Angela started to sell bananas in her local markets.

Living in such a rural area of Timor-Leste, the roads to her village are difficult to drive or even cycle along. It is easier for Angela to walk and carry the bananas with her, although this takes longer.

When she heard that there was an ADRA project coming to her community, she jumped at the opportunity to get involved. ADRA’s Farmers to Market project helps farmers like Angela learn new skills and strengthen their income.

She was most excited about being able to attend the Farmers Field school to learn more about agriculture and business.

Angela faithfully attended every class and learned how to grow and harvest ginger, and its value in the market. She also joined a collective farmers group in her village. The farmers group have a signed contract with buyers. This means Angela does not have to sell her ginger in the local market but can instead sell straight to the contractor meaning a better price and saving her time and money.

Angela is already planning next years harvest and will grow even more ginger to sell.

She is grateful for the ADRA project and the better income she now has. She also can now spend more time with her son and offer him a brighter future.

Learn more about the FarMar project and donate to help more people like Angela here.

*Name has been changed to protect identity.

If you would like to support our projects that help girls, boys, women, and men, you can make a donation to ADRA. Your support will ensure we can help people where and when it is needed most, including projects that support girls in education!